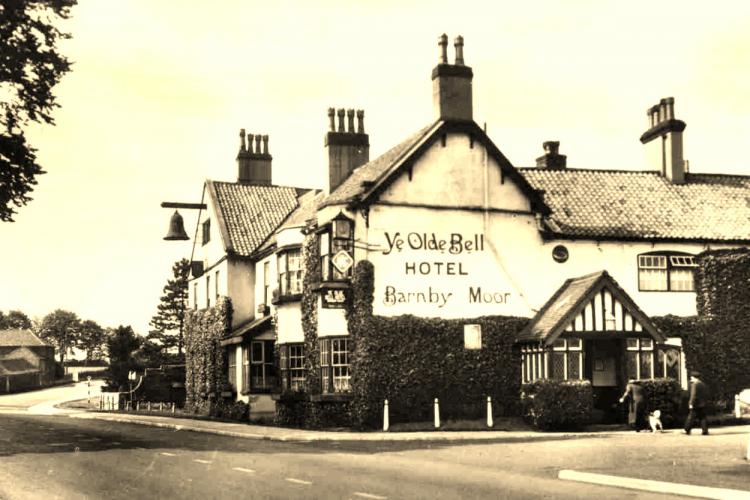 The Barnby Tales: 400 Years of History at Ye Olde Bell

The tale of Ye Olde Bell goes back to time immemorial. For us, history’s presence is as familiar as a live-in guest. Our nearest town, Retford, is one of England’s oldest boroughs, listed as Redeforde in the 1086 Domesday Book. The name is believed to nod to the river crossing it provided on the Great North Road. This medieval thoroughfare linked London with Edinburgh; as travel became faster and more frequent, it became the artery of modern Britain. So it came to be that travellers from every walk of life and every era rung at the Bell.

Ye Olde travellers have made their mark upon the hotel; each of their stories adds a sentence to our own. Here is our highlight reel of times past at Ye Olde Bell…

In the 1600s Ye Olde Bell was a humble farm, quietly unsuspecting the legions that would pass under its roof. One dark night, a lost rider named Ralph Thoresby alighted at the door. Our first guest had exhausted his patience and his navigation skills scouring the Nottinghamshire wilds for a drunken friend. Not a rave review for ‘Why Stay?’, but need’s must.

It was in 1635 that the new postal service introduced the first sustained traffic into the area. Stagecoaches and opportunist highwaymen swiftly followed. Caught in the midst of a transport revolution, the farm adapted and—voila!— an Inn was born. For two hundred years, postal carts frequented The Bell. They had right of way on the roads, were exempt from tolls, and travelled with an armed guard to protect their cargo from highwaymen. Guards were responsible for delivering the post by hand if necessary. During the cold winters which brought the ‘Frozen Fairs’ to the Thames, several guards even froze to death guarding broken down carts. 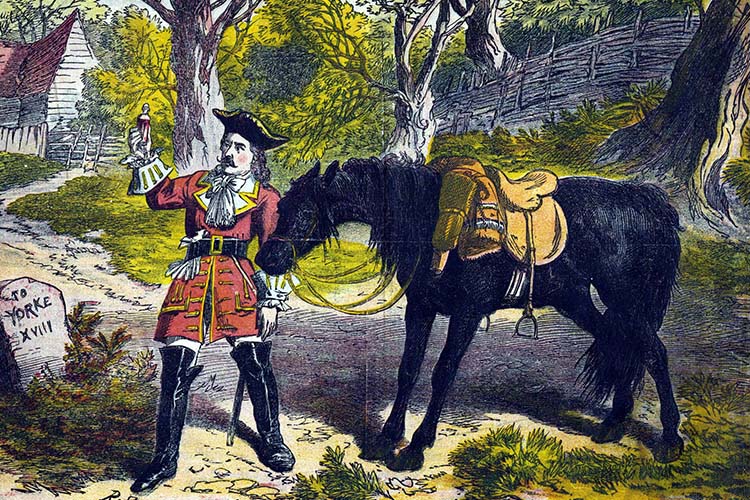 Nineteenth Century: The Bell of the Ball

The 1800s saw the Inn, then the Blue Bell, blossom into a ‘famous baiting place for the stages that passed between London and York’. The landlord from 1800-1842, George Clarke Esquire, was an avid horse breeder. He kept stables for 120 horses alongside beds for 60 post boys.

During this period, the young Queen Victoria stayed with her mother, Duchess of Kent, on their way from London to the York music festival in 1835. You can stay in her room, the aptly named ‘Victoria Suite’.

In 1849 the railway introduced a direct line from London to York which passed through Retford. Prince Albert and the Queen had given the royal seal of approval to the railway, and suddenly stations were abuzz with travellers visiting hotels like Ye Olde Bell and exploring their country for the first time.

The Bell’s notoriety was curtailed when its next owner, Henry Beever, converted the inn back into a private home. The courtyard archway where travellers disembarked became an ornate reception room and the horse pond was filled in. Beever did make room for one almighty guest; he built a chapel in an area that is now bedrooms. The chapel’s aisle is now the corridor for rooms 5-17.

By 1905, ownership had passed to Mr Grain of London, who reconverted it into a hotel. However, he seemed to be going against his own name; his application for a liquor license was rejected twice over. Some say his bitter feud with the proprietors of the nearby White Horse was at the bottom of it. The drama may have given him a shot in the foot, but certainly none down the gullet! 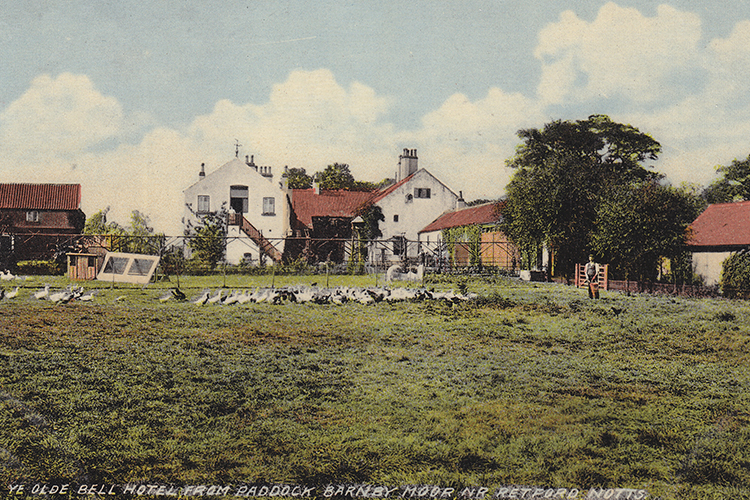 New Wheels: Age of the Automobile

A Mr Denys Dundas managed the newly christened Ye Olde Bell Hotel in the early 1900s. The hotel held the official appointment of the Automobile Association (AA), and included an inspection pit for all the cars to be tuned up before setting off. Early classics such as Minervas, Argyles, Daimlers and Renaults often lined the drive.

In 1917, the hotel was temporarily closed due to the First World War. The war effort had mobilised the country, decidedly off-road. 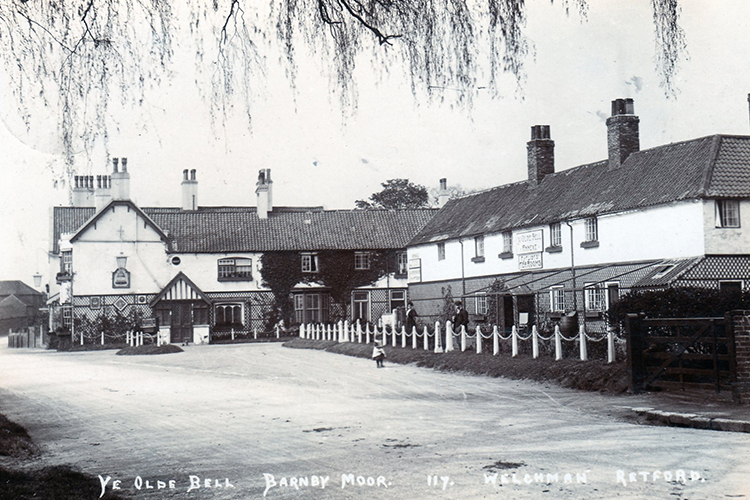 Thirties: Putting on the Glitz

On 23rd September 1932, glitz and glamour descended upon the hotel. Film stars arrived to shoot scenes for a Gaumont film called The Good Companions, based on the JB Priestley novel. In the book, a husband goes ‘on t’road’ to find fame and fortune in the south. The production included screen sensations John Gielgud and Jesse Matthews. Gielgud is remembered alongside Ralph Richardson and Laurence Olivier as one of the holy trinity who defined twentieth-century British theatre. Jesse Matthews was a darling to the nation, her celebrity climbed even higher during the Second World War.

In 1939, the hotel became the headquarters of the First Cavalry Division before they left for the Middle East. The officers took the hotel whilst other ranks slept and dined in the stables. When they left, the whole village turned out at midnight, with homemade sandwiches and cake to fuel their journey. 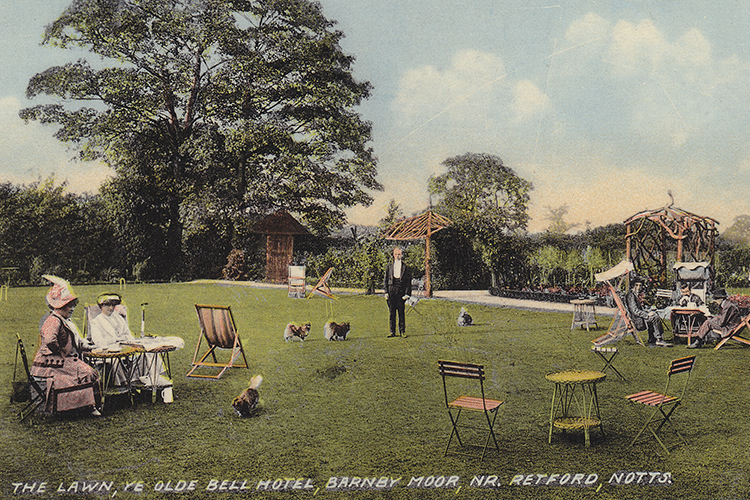 For Whom The Bell Tolls

In 1953, Ye Olde Bell hosted racegoers attending the legendary ‘St Leger Week’ in Doncaster. There was an electric atmosphere at the Racecourse, where even the Queen and Prime Minister Winston Churchill were attendees. However, unbeknownst to jubilant racegoers, devastation had struck The Bell. A fire engulfed the building and, despite the efforts of five brigades, two wings of the hotel and thirty bedrooms were lost to the flames. Racegoers staying in the hotel had quite the shock when they returned to find the hotel ablaze. At a minute’s notice, local aristocrat Lady Galway opened her home, Serlby Hall, to accommodate them all. Mr Leigh, the Manager, kept the hotel bar open and served (stiff) drinks by candlelight. 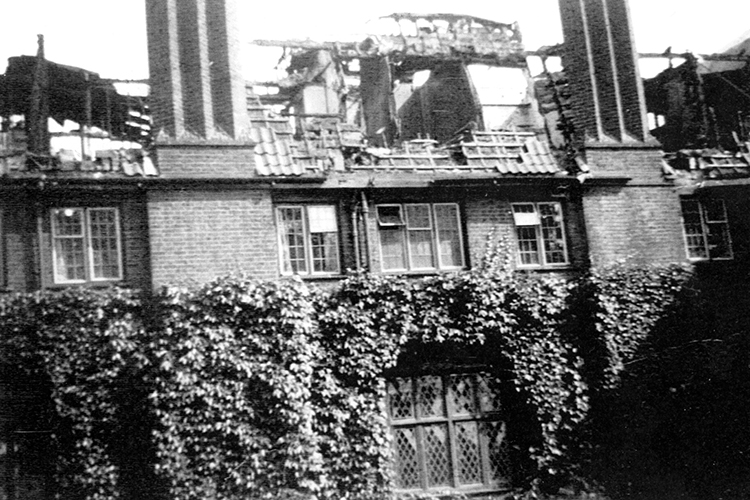 After the fire The Bell sold to Mr Hans Nielsen, who is still fondly remembered by guests today. He initially came over from Denmark on the same boat as Lord Charles Forte. Having bought the Bell for £28,000 in 1954, Hans immediately set about improving it. We still hear stories of his staff: Miss Ruddy, the strict Housekeeper, Miss Hill, Head Receptionist, and Harry the Greek, Head Waiter.

The Wiseton Suite and the Bradgate Suite originate from this period. When the ancestral pile of Wiseton Hall was demolished, Hans bought its elaborate ceiling for £4 10s to create the Wiseton. The Bradgate’s Suites distinguished oak panelling came from Bradgate House, which had once been home to Lady Jane Grey. The ill-fated Queen reigned for nine days, before her cousin, Queen Mary, had her executed in 1554. Today, we serve Sunday Lunch in the atmospheric Bradgate Suite. Guests have reported sightings of Lady Jane walking in the room; perhaps real, perhaps the product of one too many Bloody Marys.

During the 1950s, the Bell retained five kitchen gardens, extensive greenhouses and an eel pond. Fresh salmon and beef were delivered from Scotland and collected by the chef at Retford Station. Hans was passionate about his poultry and pigs. He would even stay up and help his pigs through labour.

Hans also had a glamourous side. He created a lavish banqueting room in the original stables and hayloft. The Bell was in its heyday and The Nielsen Suite hosted the most renowned balls in the area. From 1955 until 1972, there were dinner dances every Saturday. A seventeen year party. Picture The Geoff Oakley Showband rocking the joint, and a raucous conga snaking through the corridors!

1959 brought the new A1, and with it great change. Traffic decreases, and the Great North Road was pushed off the map, but the show went on! In the winter of 1959-60, the Bell hosted the great cars from the era, with over 70 competitors for the only British checkpoint. Over the last five years, we have reintroduced the Monte Carlo checkpoint, together with other rallies and enthusiast clubs.

Many famous faces have stayed with us over the years, from Charlie Chaplin to One Direction, Bing Crosby to Shirley Bassey… Our distinguished visitor’s book is available at reception for viewing. 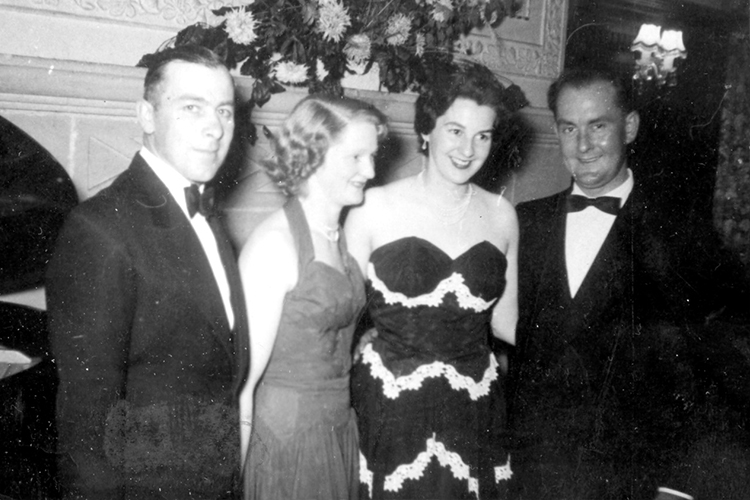 As another eventful year draws to a close, we look forward to the beginning of a new decade. What will the twenty-twenties hold for Ye Olde Bell?

Enjoyed our blog? Why not read our others.