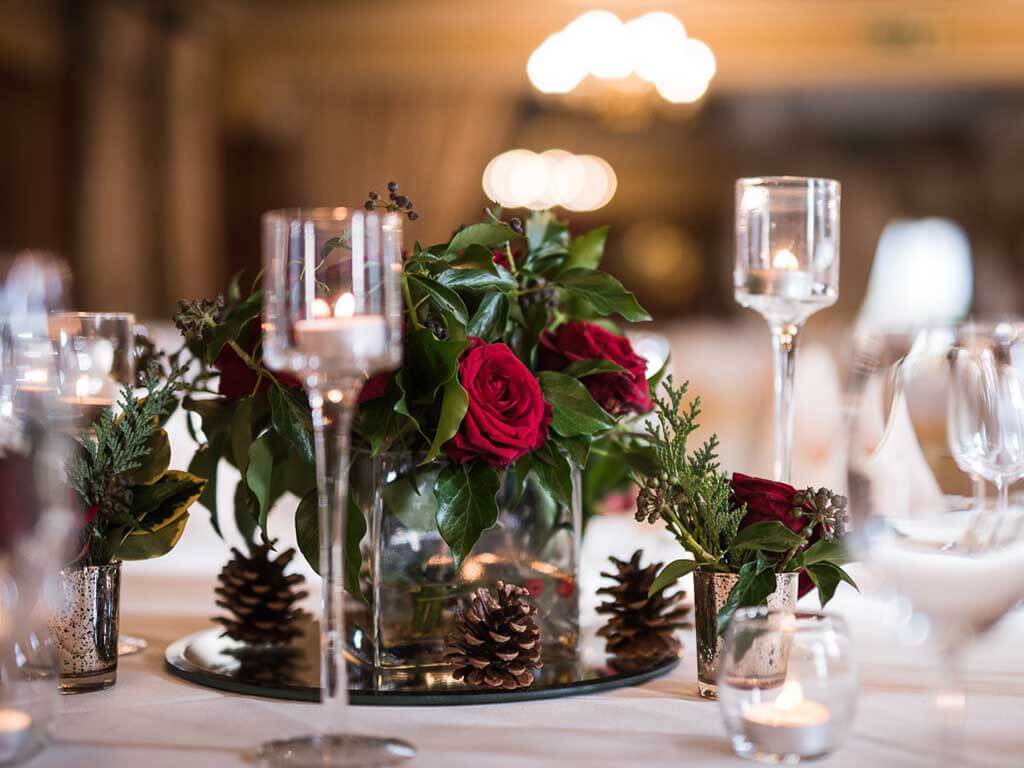 Have you ever wondered where it all started with the Great British Christmas? How, for example, did we settle on turkey rather than duck or goose? Why did we start spiking the pudding with booze? And who came up with the explosive novelty of the Christmas cracker.

Here at Ye Olde Bell Hotel & Restaurant in Barnby Moor near Retford and Doncaster, classic Christmas lunches, dinners and parties are not exactly a new thing. For well over 3 centuries folks have come from nearby Doncaster, Nottingham and Sheffield for a taste of festive cheer. Travelers on the long, chilly road from Edinburgh and York to London would crave our roaring log fires and a mug of mulled beer or wine long before they saw the light of our hotel. These days we still prepare a hearty Christmas Menu throughout the 2017 festive period. Winter travelers are just as welcome as ever and many guests celebrate the festive period with us on one of our relaxing, flexible Festive Breaks. We still have real log fires, traditional Christmas fayre, the finest wines and spirits and very warm hospitality from our team, but we've done a very stylish restoration of the hotel inside and out to respect its history yet bring it firmly into the 21st century.  During December, our exterior Christmas decor is quite an attraction and from the moment you step inside the front door, you will be impressed by our bespoke decorations and trees throughout the hotel.

Our friendly team make it a real 'home from home' country house Christmas whether you come with family and friends or on your own for a quiet break or to meet and socialise with other guests.  We know you will enjoy our seasonal cheer and delicious festive food, but in the meantime, here are some of the Christmas traditions that live on to this day, along with the secrets of their origins explained:

At first glance, it might seem a bit odd that turkey is the staple of the British Christmas dinner. After all, aren’t meats such as goose, duck and pheasant more common in our countryside? In reality, the practice only became widespread in the 16th and 17th centuries, as populations grew and we switched from relying on native game animals to farmed and imported meats. It is said that King Henry VIII was the first monarch to eat turkey on Christmas Day (well, he did have a habit of getting rid of birds at quite an alarming rate). The birds would have come via Spain and, you guessed it, Turkey, and for many years would have been the preserve of the rich, who were also quite partial to swan or peacock!

We all love to carry on the merry-making the day after Christmas. Dads get creative with leftovers, while these days it is also an occasion for entertainment, games and sports. Is this where the word “boxing” creeps in?

Not exactly. In fact, the term refers to the boxes of gifts and leftover food that were given to the less well off by their masters and the upper classes. Often this was a good-will gesture of sorts for servants and others who had worked on Christmas Day. It is only recently the day has become a day of mad sales, rather than charity and relaxation. Should you wish for a more laid back Boxing Day, however, you could book some time in our new Spa, visit the local Grove & Rufford Hunt Meet or take a brisk walk or cycle ride in our National Trust Clumber Park and then stop by at Ye Olde Bell Hotel where we serve all manner of tasty fare, including options such as seabass and roast sirloin of beef (and not a plate of leftover turkey in sight!).

We think of both these dishes as traditional British sweets, but the earlier versions would have been made with meat, spiced with then rare additives such as cinnamon and cloves. A good slug of booze, usually brandy or rum, would not only have added an extra kick and warmth, but helped to preserve these treats, which were often prepared well in advance of the day itself.

These days, the classic Christmas pudding has made something of a revival, as the black, burned and barely edible version some of us remember from school days is replaced by a myriad of special, modern recipes. Done well, it is an absolute treat- as we’re sure you’ll agree with a taste of our version of this timeless festive pudding.

Another timeless Christmas favourite, this drink is probably younger than you thought, at least in its modern incarnation. It was the Victorians who popularized the drink on a larger scale, although before that time, spices would often have been mixed with alcohol. Much of the time, this would be to improve the dodgy taste of wine or spirits that hadn’t travelled well!

For much of Britain, it would also have been the local brew that would be given a festive twist, rather than red wine. Mulled cider and mulled beer (called “wassail” in Wales and the west) would have been highly popular and warming drinks.

The Origin of the Christmas Cracker

Ask most Christmas party revelers and they would guess that these Christmas novelties were as old as the hills. But the original Christmas Cracker appeared no earlier than the mid 1800’s and was created by Tom Smith, a London confectioner. Inspired by the attractive presentation of French sweets, twisted at the ends, he got the idea to add a bang from hearing the snapping, popping sounds of his own fireplace.

The idea was sensationally successful, with lots of variants produced. Posh, bespoke crackers might contain gold and silver jewellery; those for less affluent families could include anything from a tin whistle to false teeth. Oh, and don’t forget the joke in each cracker, which according to strict tradition must be toe-curlingly bad (even after your 2nd mulled wine).

Are you looking for the ideal venue for Christmas lunches and dinners this year? Whether for family occasions or office Christmas parties, we offer a superb selection of festive food, combining the best of British tradition with more than a few special touches from our chefs. Do have a peek at our menus for a flavour of “Christmas Future”!

There are various festive meal options available and we also offer some relaxing Christmas & New Year breaks plus Twixtmas Escapes to help you unwind and enjoy the best of the Christmas holidays. We are open throughout the festive period in 2017, including the Christmas holidays and our spectacular New Year’s Eve Black Tie Ball is not to be missed. See our dedicated Christmas section for a range of dates, dishes and fine festive events.